C# allows you to declare raw pointers to memory, such pointers can only be declared and manipulated if the project in which they appear has the “Allow unsafe code” option enabled and the code block has the “unsafe” keyword specified.

C# will not allow you to get at the address of a datum if that datum is itself a reference type or if it contains any member fields that are reference types.

Fixed actually causes the compiler to declare a fixed pointer – this is an IL concept and means that the GC is prevented from moving the memory containing your datum until the fixed pointer goes out of scope (of the fixed statement block).

While the code within the “fixed” block is executing the GC is prevented from moving the managed object “container” declared on line 15.

The Visual Studio debugger makes it easy to see raw memory when debugging, this is a useful feature when working with C# pointers. 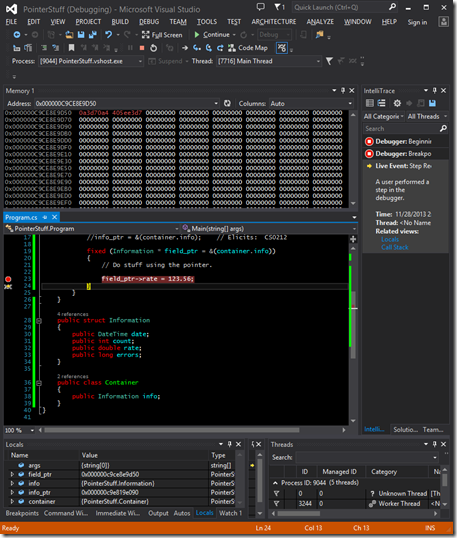 If you comment out line 17 and add the line shown at 23 above, then run the app with a break on line 23 the app will stop at that line. Then if you click Debug->Windows->Memory->Memory 1 you will see a memory dump window. If you then single step and execute line 23 you’ll see the modified bytes in the memory dump (they get highlighted in red). The memory dump window lets you see what gets changed but also where – which bytes – get changed, this is invaluable when working with interop scenarios in which memory might be getting accessed by managed and native code.